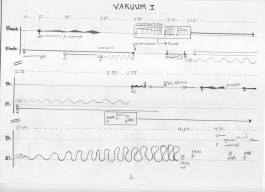 The title „Vakuum" refers not to the idea of real emptiness, or absence of matter, but as the concept of vacuum energy and the quantum vacuum fluctuations. These are interpreted in quantum physics as an underlying energy that exists through the universe and its fluctuations or temporary changes in a point in space are impossible to determinate with precision due to the uncertainty principle. The score for this piece is written in temporary graphic notation, and even though is highly specific in its indications, has also a high degree of openness allowing for spontaneous changes to occur.

The piece is composed by the composer performance duo Marisol Jimenez (amplified objects) and Julius Holtz (live electronics). The Berlin based duo focuses on experimental improvisation, performing non traditional electro-acoustic self built instruments, which are a hybrid mixture of objects and electronics. The concerts are dedicated to exploring the relation between electronic music and acoustic objects as the instruments are exclusively played in real time.